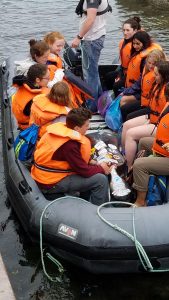 The ferry to Great Blasket Island has been able to go out only four times in the last two months, due to weather. But when we arrived, we brought the sun, and the day was sparkling and glorious.

McKinley wanted to bring her cello, but was a little worried about its safety. The ferry would have been fine, but the little dinghy between the ferry and the island was a little more sketchy!

We’ve discovered that, as with much misery, you can talk yourself into or out of seasickness. And we discovered Milky Moos – a creamy lemon drop over a caramel center. Ohh Milky MOOS!!!