Seals are shy. Everyone knows that. Shy, and dangerous. But perhaps that’s because people often were known to kill them for their oil and meat. There’s old wisdom here that to heal a seal bite, you stuff in a chunk of seal meat.

But this is also the land of the Selkie, a seal who can slip its skin and turn into a person.

The Barders were warned that the Atlantic is icy cold, and not good for swimming, but the sun was so bright, the invitation of the sea was impossible to resist. They dove in. And the twenty or so black bumps in the water that at first seemed to be rocks, turned out to be a rookery of seals. Curious seals, who saw their own in the girls who dove among the waves.

They came to explore, splashed, dove, and the girls splashed and dove with them. The seals were so comfortable, they came within inches of the girls. And when it was time to go, they swam together towards the shore, saying goodbye. 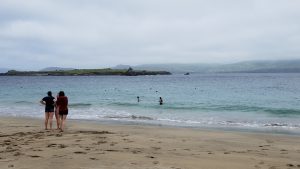