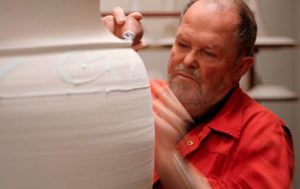 After our experience with Marie, the artist, we went back to the the Pottery (http://www.louismulcahy.com/) to see the other side of this intensely creative man. 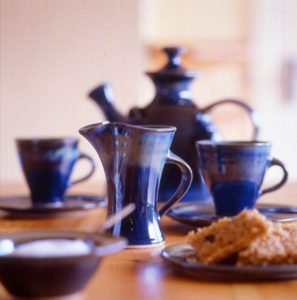 Louis Mulcahy started writing poetry at age 65, and was immediately recognized. Wisely, when a publisher asked to put out a book of his poems, he titled it Clogher Quartet, committing the publisher to a series of four. The other three were not far behind. Writing first in Irish Gaelic, then translating himself into English, the poems have the sound of a song, a cadence and intricate rhythm that makes one draw in breath and not release it until the poem is over. We were treated to an hour of his poems, and then shared with him one of our songs. It was not a fair exchange, and we left much the richer.

Here’s the one we’ve integrated into our performance.

Spade in hand
earthing up potatoes
ears alert for the front door slam
heard only summer peace;
bees and the low close gurgle of secluded pigeons
an occasional vague bark
and the murmuring moan
of a mowing machine
on that bright day so long ago.

Then
all sound shrank
the frail flowers stilled
and turned
towards something
vaguely sensed;
for in that doorway framed in russet
she stood gazing
shaming summer’s colours
with green eyes
light as the smiling sun;
sun that shone from the golden face
beneath the long red hair.

At twenty-two years
with baby of twenty-two days in arms
quietly looking out
a marvel to lighten the heart
constrict the throat
dissolve the mind
as it did
on that bright day so long ago.

For framed again
amidst wild flowers springing to life
at midnight
in the airport concourse
was that golden girl
green eyed still, red hair gone grey
quietly looking out
for one all set for husbandry
as she did
on that bright day so long ago.